Two things happened in February that made me feel like I should do a roundup of trends we’re seeing in payments in our research across the globe. One of these events resonated across the payments industry worldwide and is likely to change the face of consumer payments and acceptance. The other relates to my children’s favourite TV show….

Let’s start with the big one. I was watching “Young Sheldon” one Saturday morning. It’s a TV show about the early life in the 1980s of the fictional character Sheldon Cooper from The Big Bang Theory. In the episode, Sheldon’s older brother Georgie scoffs at his suggestion of a device that is a camera, a phone and a music player. I laughed. My 9- and 11-year-olds’ did not. Why would they? Phones have always had these things as far as they are concerned.

This wasn’t a moment to offer a dad’s monologue about how we never had mobile phones when I was a kid, the concept of a personal computer was a pipe-dream and Dire Straits were setting the musical agenda. However, it did encourage me to reflect on how the phone/camera/music player is also so much more and that it is fast ingraining itself as a mainstream payments mechanism.

RFI Global’s recent research from our Global Digital Banking Council informs us that mobile payment wallet usage at point of sale (PoS) has increased significantly in many countries around the world over the last 3 years. Chinese and Indian urban consumers are well ahead of the curve and mobile payments are almost ubiquitous, but even in markets slow to adopt new payments technology, we’ve seen a marked increase in mobile wallet adoption as accessibility improves in tandem with comfort and familiarity. 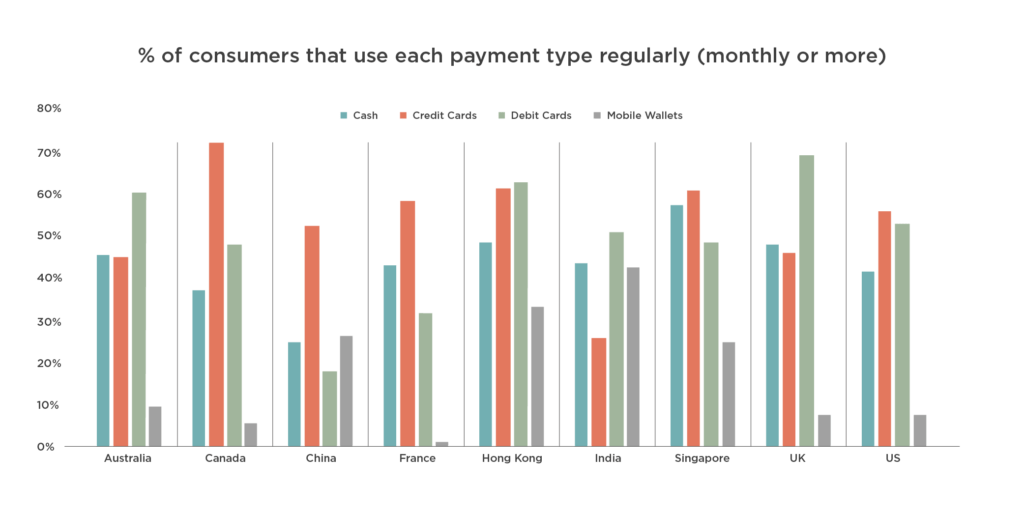 The challenge for mobile payments (and indeed any new payment mechanism) has always been the extent to which consumer adoption becomes habitual. Do they only use it occasionally, or do they use it regularly? The problem has always been that very few mobile wallet users, use their mobile wallets habitually. For most, usage has tended to be a ‘novelty trial’ or an occasional usage at best. In fact, RFI Global’s data shows that in many of the markets – particularly Western markets – 10% or less of the population has habitual usage of mobile wallets.

Asian markets are again, well ahead, but in most this regular usage still sits well below more traditional electronic payment mechanisms like debit and credit, and even behind cash. 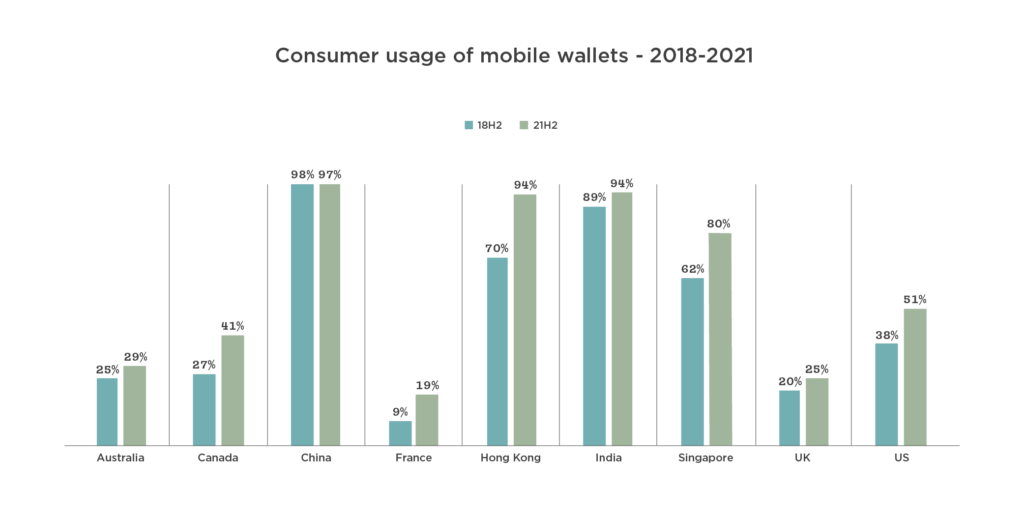 Personally, I use mobile payments almost exclusively. It’s only in rare instances where I buy something from a merchant that doesn’t accept electronic payments, that I resort to other methods. So, it’s always been interesting to me that I am in the minority.

At RFI Global, we’ve been observing payments for more than 15 years. During this time we’ve built up a comprehensive understanding of what it takes for a payment mechanism to be successful. There are three principle pillars on which any successful payment mechanism stands. These are:

Ultimately, if consumers perceive that you don’t tick one or more of those boxes, then you are effectively dead in the water.

Beyond these factors, there are two principle barriers to usage, which hold consumers back. These are:

On the trust side of things, familiarity would help, but in many of the markets mentioned above, there are simply not enough people using mobile wallets that the average person feels like they are mainstream and therefore ought to be trusted. We are seeing growth in usage, but it is not a rapid rise by any stretch. So, what to do?

And this brings us to the second February ‘event’ that prompted this article. It wasn’t long after my ‘Sheldon moment’, on the 8th of February, that Apple announced that it would enable iPhones – initially in the US – to act as a terminal to accept payments for Apple Pay and other contactless cards through Tap to Pay. In doing this, Apple will remove the need for terminal hardware (not even a plug-in device will be required).

There are some obvious benefits for merchants of every size. Not in the least is the fact that this move would lower the bar – cost and process-wise – for micro-merchants to accept electronic payments almost overnight. However, many PoS terminals there are in any given country, I think we could expect that this would grow with an influx of micro-merchants.

Now, ‘Pin on Glass’ solutions are by no means new. This is not what makes Apple’s move so significant. Rather, it is the huge number of Apple devices already in use and the inherent trust that consumers will feel from having this solution being a part of the walled Apple ecosystem that is the game-changer.

As consumers start to see more merchants accepting payments via iPhones, they will become more familiar with smartphones as payment devices and are likely to be even more comfortable with the concept and to try.

In addition, one of the problems we see in our consumer payments research is a lack of understanding of what is required to make a payment via a mobile wallet and an associated hesitancy. This is true for any first-time mobile wallet user and you definitely don’t want to be the person in the shopping queue fiddling around with a new way of paying for the first time and holding people up. In the past, education was left in a sort of ‘grey space’ where none of the parties involved – wallet provider, issuer or merchant – did enough to walk consumers through the process. In the new Apple iPhone terminal scenario, with merchants and consumers effectively using the same device, the opportunity for consumer education by the merchant grows significantly.

It’s fair to say that payments innovation is moving apace. However, in many cases, consumer adoption of new mechanisms is not growing at the pace that industry participants would want to see. Ultimately, any innovation that brings together two parts of the payments value chain – consumer and merchant – will eventually create opportunities for growth in consumer comfort and a step towards ubiquity and habit. Apple’s Tap to Pay is one example of this. I for sure, am looking forward to seeing what’s next.

For more data-driven insights from our Global Digital Banking Council, why not reach out.

The Global State of BNPL | Australia