A few years ago, the concept of “buy now, pay later” (BNPL) was largely confined to old fashioned hire-purchase models, in-store finance, credit card instalment plans and the ‘bank of mum and dad’.

Fast forward to 2021 and if you haven’t heard of BNPL, then you are probably living under a rock. Brands like Klarna and Afterpay have burst onto the scene internationally and have struck a chord with consumers and merchants alike.

“In Australia awareness of BNPL is almost universal, with 92 per cent of all Australian adults familiar with a BNPL brand and almost one-in-three having used a BNPL service.”

For consumers, the ‘no-cost’ proposition appeals, while for the merchants (who ultimately fund the model), the cost of BNPL acceptance is offset by the ability to increase average basket price, expand the customer base, achieve higher repeat customer ratios, lower checkout abandonment and reduce the risk and overheads of traditional instalment payment models.

RFi has been tracking the BNPL space for more than four years now and, among other trends, are seeing awareness grow rapidly. In the UK, 67 per cent of consumers are aware of a BNPL brand while in Singapore – a market already familiar with instalment payments through credit card programs – four out of five consumers are aware of the BNPL construct. RFi data show even in Canada – a market where BNPL is very new – 20 per cent of consumers recognise BNPL and 12 per cent have used it.

Meanwhile, in Australia, awareness of BNPL is almost universal: 92 per cent of all Australian adults are familiar with a BNPL brand and almost one-in-three have used a BNPL service.

Interestingly, RFi data show the proportion of Australian adults who have used BNPL remained steady at 29 per cent between November 2019 and November 2020.  This is despite new players emerging, suggesting usage among existing BNPL users has expanded to include more brands and existing customers are using services more frequently – moving from irregular to habitual.

Since November 2018, awareness of BNPL services in older age groups has risen substantially to at least nine-in-10 consumers. It is notable the most significant growth in BNPL usage over the last 24 months occurred in the 35 to 44-year age group, contrary to the popular belief it is only younger consumers using BNPL. As the market has matured and usage is more common, this age progression represents a maturation of BNPL in Australia. 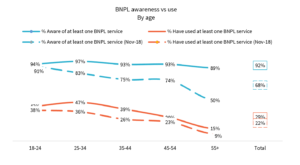 As BNPL emerged, the Australian regulators took notice but to-date have taken no action that would make a significant impact on the growth outlook for the industry.

However, the Australian Securities and Investments Commission (ASIC) has indicated two safeguards it would like to see introduced: capping late payment fees; and preventing consumers from making further purchases if they miss a payment. However, according to the regulator, not all BNPL providers have made these changes yet.

The Australian regulatory response stands in contrast to what might be seen out of the UK where the Financial Conduct Authority (FCA) has written to Treasury to ask for BNPL to be brought under its regulatory remit. The FCA also published a review of BNPL by former CEO Christopher Woolard, which makes 20 recommendations and calls for “urgent” regulation of BNPL. RFi will be watching in anticipation to see what happens in the UK market as that can provide a window into future regulation in Australia.

Another area of anticipated change centres on the acceptance fees merchants pay (in some cases around 5 per cent of the transaction) and merchants’ current inability to pass those fees on to the consumer in the form of a surcharge. In December 2020 the Reserve Bank of Australia’s (RBA) Philip Lowe said the “no surcharge” rule was unlikely to be scrapped anytime soon – obviously favourable for consumers and BNPL providers. If that situation were to change in the future, the introduction of surcharges could impact significantly on consumer appetite. Merchants would be wise to start weighing up the pros and cons of surcharging.

The biggest potential headwind for BNPL providers would be a challenge to funding models. Currently, BNPL providers need to borrow short-term to fund purchases made by consumers. That works well in the current ultra-low interest rate environment, where costs of borrowing are lower than the percentage fee that BNPL providers get from merchants on the purchase value. However, with increased competition in the market, it could reasonably be expected that fee will come under pressure and if it reduces as borrowing costs go up, then that could challenge the whole BNPL model.

RFi data show there is a correlation between the number of BNPL brands a consumer has used and the incidence of late payment fees incurred. Looking at the numbers, 25 per cent of consumers using three or more BNPL brands have struggled to meet repayments compared with fewer than 10 per cent of those who use two or less BNPL brands.

With the average BNPL consumer using 1.6 brands, this is clearly an area to watch, particularly when combined with ASIC’s finding that BNPL credit card users are much more likely to revolve and much more likely to be using more than 90 per cent of their card’s credit limit.

So, what is the outlook for BNPL? Clearly the model is popular with a large section of the Australian retail sector, Australia offers a favourable regulatory environment – at present – and the low interest rate environment means the cost of funds for BNPL brands is extremely low.

The signs are good for BNPL and consumer data reveals we are heading towards habitual usage.

With regulators choosing to stand on the sidelines for now, it certainly looks like the model is here for the medium term and the market is limited only by imagination.

The Global State of BNPL | Australia